Concerns about holding a large gathering in light of the COVID-19 restrictions/ recommendations and, even more so, concerns about putting brothers and sisters at risk, weighed heavily in the decision.  Multiple options were discussed, but after working through each one, the unanimous decision was made to postpone the entire event until 2021.

Jeff Bach is director of the Young Center for Anabaptist and Pietist Studies at Elizabethtown College and teaches in the Department of Religious Studies. He taught courses related to Brethren heritage for thirteen years at Bethany Theological Seminary in Richmond, Indiana. He earned his Ph.D. in religion from Duke University in 1997, concentrating on the history of Anabaptist and Pietist groups. He is the author of Voices of the Turtledoves: The Sacred World of Ephrata (Penn State Press, 2003). Among his recent articles are “The Ephrata Community in the Atlantic World” in Protestant Communalism in the Trans-Atlantic World, 1650-1850 (2016) and a chapter on Jacob Boehme in Protestants and Mysticism in Reformation Europe (2019). He is an ordained minister in the Church of the Brethren. He is married to Ann Mason Bach and they have two adult daughters.

Insight Session:  "Do the Crime, Do the Time: Brethren Imprisoned for Baptism"

Pastor Brad currently shepherds the East Chippewa CoB congregation near Orrville, OH. He has been Pastor of East Chip since June of 2011. He is thoroughly thankful and knows he is blessed for being able to pastor at East Chip. Brad is celebrating 30 years of pastoral ministry in January of 2020. He and Sharon, his wife of over 33 years, have three grown children and live in the West Salem area.
Brad accepted the call to be our "2020 District Moderator" during the 2018 District Conference. He has been in this type of District role 20 years earlier in his previous pastorate in the Fellowship of Grace Brethren Churches. Recently, he has become one of our teachers in the District's Brethren Buckeye Institute. He taught the Fall 2019 BBI course on "Evangelism." For nearly the last 2 and half decades, He has provided quarterly preaching for the evangelistic chapel services at Akron Ohio's homeless shelter, the Haven of Rest.
Brad received formal higher education training from Grace College (Bachelors with a double major in both Biblical Studies and Speech Communications), Ashland Theological Seminary and Liberty Baptist Theological Seminary (Masters of Divinity and some Doctor of Ministry course work).

After 42 years of church work, Tom Zuercher retired from full-time ministry in 2018. In the Northern Ohio District, he served as pastor for three congregations: Danville North Bend, Mt. Pleasant, and Ashland Dickey, and was District Executive for twelve years. In additional to pastoral work, Tom has served as a teacher, spiritual speaker, retreat leader, consultant, and author. He and Susan live in rural Ashland County and are always delighted to spend time with their children and grandchildren. In retirement, Tom has enjoyed traveling, making presentations on philately (stamp collecting), and O-gauge model trains.

20/20 Vision: Brethren and Christ’s Vision for the Church, Presented by Jeff Bach

In this session we will check our spiritual vision for the Church to find out if we’re seeing 20/20. Using the conference theme scriptures of the Great Commission (Mt. 28:16-20) and Mt. 16:18 to explore how various groups in the Brethren movement have understood Christ’s vision of what the Church can be, and what Christ’s programmatic vision for the Church can be. Come join the conversation about how Brethren throughout their history have understood and applied these and other scriptures for a faithful Church.

In the first session of our Pre-Conference Workshop, Tom Zuercher will share about the things he has learned during his 42 years of church work, some of the mistakes he's made along the way and advice he is willing to give.  There will be a question and answer time set aside for more in depth conversation with those in attendance.

We're excited about our Ice Cream Social Friday evening, sponsored by East Chippewa Church.  Jim Boedicker, a gifted musician and entertainer (a member of County Line Church) will be providing entertainment during the social.  We hope you plan on joining us for the fun! 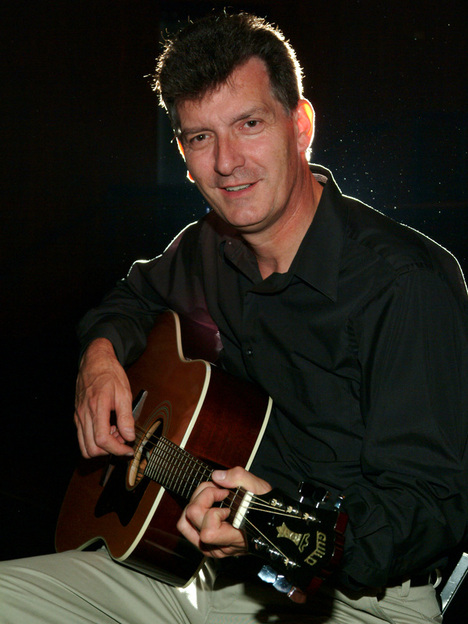 In this age of high tech music, it’s sometimes nice to know that someone can still make music “the old fashioned way”.  Jim’s unique “fingerstyle” guitar playing appeals to a wide range of audiences. His repertoire includes many humorous songs, occasionally some trick guitar work, standards, and serious songs that can speak to and stay with his audiences. His casual style works equally well in a large concert setting or a small intimate group, and he especially enjoys performing family venues.

Forty years of guitar playing has found him performing everything from rock to country and bluegrass to gospel.  He  established himself as a legitimate songwriter when he won second place at “The Christian Artists Music Festival” in Estes Park, Colorado in 1981.  Since then, he has been active in jingle work and performance for local radio and television as well as production, promotion, recording, consulting, and encouraging aspiring talent. His recordings enjoy regular airplay at radio stations in the northwest Ohio area.

In addition to his solo performances, you will find him in a “behind the scenes” position for other artists and groups. He performs routinely for numerous civic groups, corporations, fairs, festivals, and numerous church and family events throughout Ohio and neighboring states.  He is utilized regularly by local Christian television and has shared the stage with some of the nation’s most respected gospel and country artists.